In November 2019 Kalamunda Men’s Shed chair John Baxter and his son Andrew decided they wanted to do something to help support the Men’s Sheds devastated by the fires in Queensland, New South Wales, Victoria and South Australia.

They set up a collection point for local Men’s Sheds to donate tools that would help these sheds re-establish themselves. They planned to transport any donated tools, after they were tested to ensure they were in working order, East in their own car by trailer.

All Sheds in WA were contacted about the tool drive and many Sheds donated tools to the cause including Mandurah, Claremont, Ellenbrook, GinGin, Pingelly, Armadale, Roleystone, Bassendean, Midland, Mundaring, Forrestdale and Gnangara. WORM4x4 (Western Off Roading Mates) also made a donation. 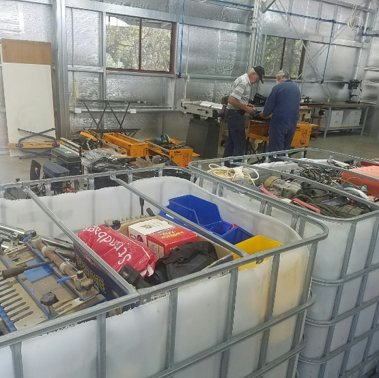 BlazeAid, a volunteer-based organisation offered to ensure the tools would get to where they needed to go. All that was needed was a new transport plan.

With the idea of driving the tools by trailer a distant memory and fires cutting off the only sealed road across the Nullarbor Plain preventing trucks getting through a new transport plan was needed. Thankfully the Federal Member for Hasluck’s office assisted. Helping to arrange for Toll Group to move the tools by rail and road at cost.

Kalamunda Men’s Shed sent out a call to all Men’s Sheds in WA seeking contributions to the transport cost. The money was raised in under a week and exceeded what was needed to cover the cost and Toll Group transported the tools on 15 January 2020.

The additional funds that raised were donated to Blaze-Aid to support their efforts.